General information about the programme

The cross-border programme between Republic of Macedonia and Kosovo* will provide strategic guidance to implementation of assistance under Component II – “Cross Border Cooperation” of the Instrument of Pre-accession Assistance (IPA). It is designed following the principles underlined in the Commission Regulation (EC) No 718/2007, as amended by Regulation (EU) No 80/2010 (hereinafter referred to as the ‘IPA Implementing Regulation’), implementing Council Regulation (EC) No 1085/2006 establishing an Instrument for Pre–accession Assistance. The implementation of this cross-border programme between Republic of Macedonia and Kosovo will be supported by IPA financial allocations for 2010 and 2011.
This strategic document is based on a joint planning effort between Republic of Macedonia and Kosovo, and is also the result of a large consultation process with local stakeholders and potential beneficiaries. The objective of the programme is to promote cooperation between people, communities and institutions of the bordering areas, aiming to foster economic development, social cohesion and sustainable environmental development. The programming process took place in the period between January 2010 and April 2010. 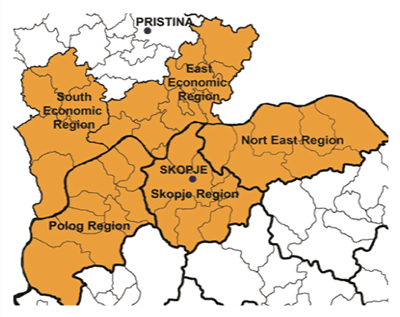 The objectives will be reached through the implementation of two priorities axes which are further detailed into measures:

The global objective of the cross-border programme is: Promote cooperation between people, communities and institutions of the bordering areas, aiming to foster economic development, social cohesion and environmental development in a sustainable manner

Joint actions and cross-border projects implemented within the programme should have an impact on the social and economic situation of the population, improve the joint management and valorisation of natural and cultural resources and strengthen the image and cohesion of the cross-border region.

The specific objectives are to:

The JTS is jointly managed by both Operating Structures. The location of the JTS is in Kumanovo, Republic of Macedonia. It has an Antenna in Gjilan, Kosovo. It consists of employees from both sides of the border, contracted by the respective Operating Structures.
The JTS is the administrative body of the programme responsible for its day-to-day management. The costs of the JTS and its Antenna are co-financed under the programme’s Technical Assistance budget provided and related to tasks eligible for the operation and cofinanced according to EU rules.

The JMC is the cross-border programme’s decision making body. JMC is composed of representatives at national, regional and local level of the beneficiaries, including representatives of the Operating Structures and of stakeholders in the programme area. The European Commission (EC) representatives shall participate in the work of the JMC in an advisory capacity.
The JMC shall meet at least twice per year at the initiative of the beneficiaries or of the European Commission and is chaired by a representative of Kosovo or Republic of Macedonia on a rotating basis.
At its first meeting, the JMC shall draw up its rules of procedure, and adopt them in order to exercise its missions pursuant to the IPA IR.

Summary of the programme

The legal provisions for its implementation are stipulated in the following pieces of legislation:

The programme eligible area includes five regions (equivalent to NUTS III): the East and South Economic Regions in Kosovo, and Skopje, Polog and the Northeast Region in the former Yugoslav Republic of Macedonia (including altogether 1 430 settlements) covering an area of 10 852 km2, where live a population of 1 800 000 inhabitants.
The cross border area is quite homogeneous in terms of geographical features, as well as social and economic development characteristics. The population growth tendency is declining. The young population is composing a large group of the population ranging from 25-30%. Migration has been one of the most concerning issues of the last decade, which has impacted the labour force (in particular in the rural areas).
The cross border area is rich in various natural resources which represent an important asset for economic and tourism development. The area is becoming more and more attractive for foreign investors, whose direct investments are playing an important role on the economic development of the border area. Trade relations between both IPA II beneficiaries have shown an increasing trend over the years. The SMEs are dominating the economic activities in almost all sectors, while large enterprises constitute a small number of economic entities.
The business sector is developing but suffering from various problems, such as low labour productivity, lack of labour market skills to cope with new technologies and innovation capacities. Although there is a wide range of higher education institutions in the area, the level of research and development (R&D) activity is very limited. Knowledge transfer should take place both locally and across the border, as well as between different sectors. The programme area is rich in natural resources, but deforestation, land and air pollution, and waste management problems are causing environmental problems and impacting the health of the population. Sustainable development, through efficient and effective use of resources, is one of the big challenges for the programme area.

The eligible bordering area for the IPA Cross-Border Programme between Kosovo and the former Yugoslav Republic of Macedonia includes five regions.

The Kosovo part of the programme area includes two economic regions and 17 municipalities with a total of 529 settlements:

The eligible area of the former Yugoslav Republic of Macedonia includes three Regions: the Polog, Northeast and Skopje Regions. It consists of 32 municipalities plus the city of Skopje including 518 settlements (six towns and 512 villages):

Management of the programme

IPA 2014-2020 programme will be implemented in direct management and the European Union Office in Kosovo will be the Contracting Authority for this programme.
The CBC bodies coordinating the programming and implementation process on the respective sides of the border are the Ministry for the Local Self-Government, the Former Yugoslav Republic of Macedonia and the Ministry for Local Government Administration, Kosovo.
The JTS is located in Gjilan/Gnjilane, Kosovo and the Antenna in Kumanovo, the Former Yugoslav Republic of Macedonia.

Kosovo-North Macedonia through Cross Border Programme had finalize the

The preparation of the programme document involved central and local

Herby, today as agreed by the Head of Delegation from Kosovo and North

So you are more than welcome any recommendation, suggestions, and

Thank you in advance,